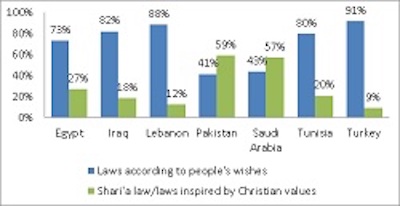 Secular Politics: Findings from Comparative Study in the Middle East

Respondents from nationally representative surveys in seven countries were asked: “Which of the following two statements comes closest to the way you feel: (1) A good government implements only the law of the shari’a (laws inspired by Christian values[for Christian respondents]/laws inspired by Jewish values [for Jewish respondents]) OR (2) A good government makes laws according to the people’s wishes?”

Findings from the seven-country surveys have shown that respondents overwhelmingly opted for a government that implements the wishes of the people vis-à-vis the one that implements the shari’a law, ranging from 73% in Egypt to 91% in Turkey. For Pakistanis and Saudis, by contrast, there was a preference for the shari’a rather than for people’s wishes.

Other survey findings available: The Birthplace of the Arab Spring: Values and Perceptions of Tunisians and A Comparative Assessment of Egyptian, Iraqi, Lebanese, Pakistani, Saudi, Tunisian, and Turkish Publics