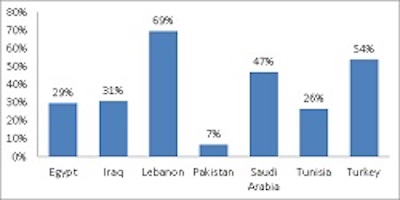 Respondents from nationally representative surveys in seven countries were asked: “In your view, which of the following is the more important basis for marriage: parental approval or love?”

The seven countries vary considerably in terms of their belief in love as the basis for marriage, with Lebanon as the most individualistic and Pakistan the least. This cross-national variation carries an interesting paradox. The respondents in Saudi Arabia, who expressed conservative values on many of the measures discussed in this report, including attitudes toward gender equality and religious fundamentalism, expressed much higher support for love as the basis for marriage. Tunisian respondents, by contrast, who have much stronger liberal orientations, displayed rather conservative attitudes toward the basis of marriage. One plausible explanation for this paradox may be related to varying levels of existential security produced by the differences in the economic conditions among these countries. Under a prosperous economy, where there is more secure employment and income stability than under dire economic conditions, people are in a more favorable subjective condition to think and reflect about marriage and love. They are also financially better situated to make independent decisions. As a result, in relatively economically well-off countries like Lebanon, Saudi Arabia, and Turkey, people tend to favor love as the basis for marriage. Egypt, Iraq, Pakistan, and Tunisia, on the other hand, are facing poor economic conditions, which tend to generate the feeling of insecurity. Such conditions may prompt individuals to fall back on the tradition and seek refuge in the protective hierarchical structures of family relations.

Other survey findings available at: The Birthplace of the Arab Spring: Values and Perceptions of Tunisians and A Comparative Assessment of Egyptian, Iraqi, Lebanese, Pakistani, Saudi, Tunisian, and Turkish Publics